My Other Cat Won’t Read My Book Either

I posted yesterday about how my cat Queen Tiy wouldn’t read my book even though authors really count on their loved ones for support. That’s why it is with even greater sadness that I must inform everyone that my other cat (Sitamun) also refuses to read my novel in story form: Bones Buried in the Dirt. 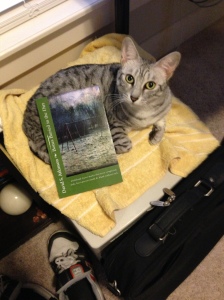 Honestly, she’s just as bad as Queen Tiy. Maybe it’s because Queen Tiy is her mother, but Sitamun doesn’t appear to be very literature-minded either. Whatever is the case, she won’t read the book. She’ll sniff at it, she’ll sit on it, but she won’t read it.

Again, I have to hope that the rest of you provide the kind of support that I hoped, ineffectually, to get from my cats for Bones Buried in the Dirt. Again, you can buy the book on Amazon, at Tattered Cover in Denver, or at The Bookworm in Omaha in person.