I was talking yesterday about being amused by some of the road signs I saw while driving around in Quebec. This deer collision warning one was immediately evident to me, but still struck me as a little weird: 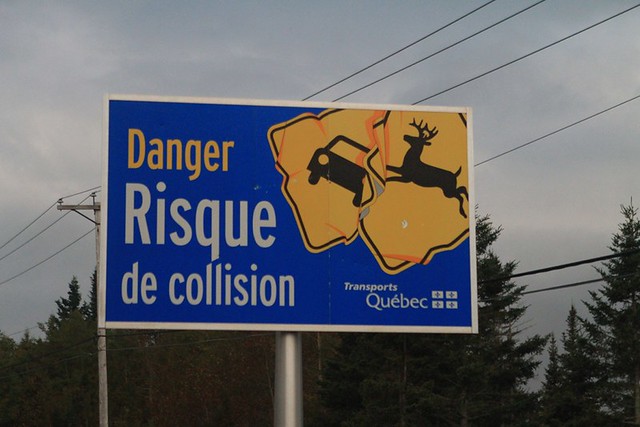 After all, I knew it was warning that deer are likely to jump out onto the road at that spot and that this can cause terrible accidents for cars who don’t see them in time to react. However, doesn’t it look like the sign is warning you that violent, angry deer may attack your car?

Watch out for those deer! Those guys are totally pissed and will come at you for no reason! You aren’t safe in your car! They will totally get in there at you! They will MESS YOU UP!

That struck me as kind of funny, because something like that happened to a friend of mine one time. It’s been a while and I might have some details wrong, but I think he was in a rental car parked on the side of a Florida highway. All of a sudden, some kind of deer charged his car and rammed the side. Took off his side mirror. No idea why.

Anyway, this amused me. Thought I’d share. Watch out for deer attacks.

David S. Atkinson enjoys typing about himself in the third person, although he does not generally enjoy speaking in such a fashion. However, he is concerned about the Kierkegaard quote "Once you label me you negate me." He worries that if he attempts to define himself he will, in fact, nullify his existence...
View all posts by David S. Atkinson →
This entry was posted in Uncategorized and tagged canada, Canada deer collision sign, Canada deer sign, canada road sign, Canada warning deer sign, collision warning, danger risqué de collision, deer collision warning, deer warning, quebec, Quebec deer collision sign, Quebec deer sign, Quebec Has Violent Deer, quebec road sign, Quebec warning deer sign, road sign, symbol language, violent deer, weird signs. Bookmark the permalink.