My wife and I were going to a Halloween party this last weekend. She hadn’t mentioned anything about going in costume, so I wasn’t sure if she was going to make me wear one. I finally asked about it and found that of course I was expected to wear a costume.

I then had to find one.

I considered what I had sitting around. I have a conservative style charcoal suit (older button style complete with vest) that I tend to wear to pinup events (I have friends who are pinup photographers and models). I also have a grey fedora that I got for such events. Put together, it passes for 50s reasonably well. 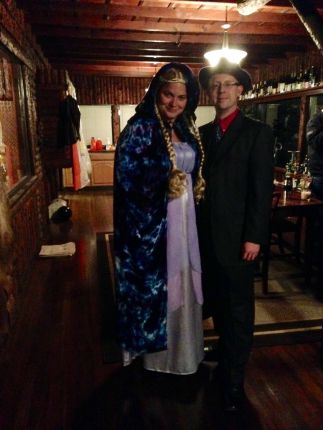 But, there was also a secret part. I wore a pocket watch in the watch pocket of the vest. It was my KGB pocket watch. Totally changes the costume, makes it much more interesting in my view. Of course, I only told 3 of the people at the party. I left it a secret for the vast majority of the other partygoers.

It just didn’t seem right to go around telling people.

David S. Atkinson enjoys typing about himself in the third person, although he does not generally enjoy speaking in such a fashion. However, he is concerned about the Kierkegaard quote "Once you label me you negate me." He worries that if he attempts to define himself he will, in fact, nullify his existence...
View all posts by David S. Atkinson →
This entry was posted in Uncategorized and tagged costume party, halloween, halloween costume, halloween party, kgb, kgb pocket watch, secret costume. Bookmark the permalink.