Once Bitten at the Fbomb Tomorrow Night (Tuesday October 18 at 7 PM) At The Mercury Cafe Denver!

Danger Slater is the world’s most flammable writer! He writes with a lot of exclamation points! He is your favorite writer! You love him! Danger is the author of Love Me, I Will Rot Without You, Puppet Skin, and more. He is well known throughout the Bizarro Fiction scene and is generally considered a menace by people who frown a lot and have respectable jobs. Check out The Danger Show at http://dangerslater.blogspot.com/, unless you want to admit that the communists in the French government have already gotten to you.

Eirik Gumeny is the author of the Exponential Apocalypse series. His short fiction can be found all over the internet and in various anthologies, and he has contributed to Cracked.com and Atlas Obscura. He is an avid fan of both Shakespeare and fart jokes. His website is egumeny.com. 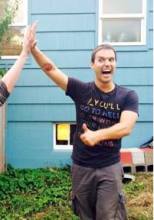 Karl Fischer is a writer and crazy person living in Colorado with his wife and their two fat dog children. He is the author of Towers (Eraserhead Press) and is part of the New Bizarro Author Series. He likes bad movies, fantastic movies, black coffee, and stories that make him cry.

David S. Atkinson enjoys typing about himself in the third person, although he does not generally enjoy speaking in such a fashion. However, he is concerned about the Kierkegaard quote "Once you label me you negate me." He worries that if he attempts to define himself he will, in fact, nullify his existence...
View all posts by David S. Atkinson →
This entry was posted in Uncategorized and tagged Once Bitten at the Fbomb Tomorrow Night, Once Bitten at the Fbomb Tomorrow Night (Tuesday October 18 at 7 PM) At The Mercury Cafe Denver!. Bookmark the permalink.